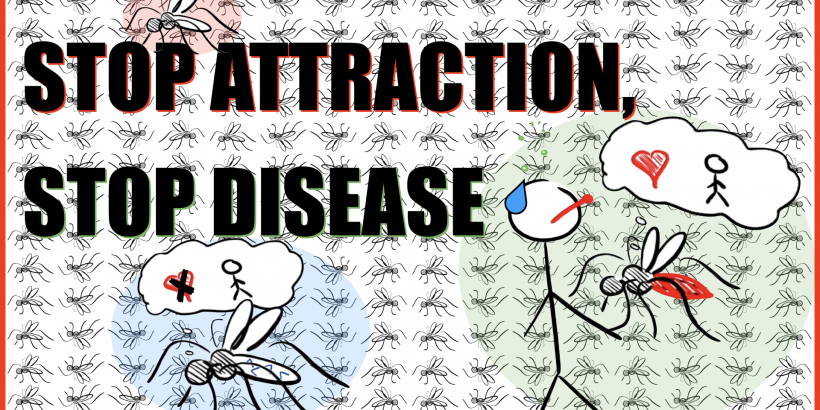 You know that characteristic buzzing and that itchy feeling that comes with a mosquito bite.  As you scratch your new bite, you may wonder exactly why mosquitoes are so attracted to you in the first place.

The female Aedes aegypti mosquito needs protein from blood to lay her eggs. Without a proper meal, she can’t reproduce. A proper meal of blood doubles her bodyweight! That’s like eating 275 cheeseburgers in one go!

In the few days after her tasty meal, she stops looking for her next human victim, and goes into seclusion to mature her eggs before laying them in stagnant water. Shortly after she lays her eggs, she goes on the hunt again.

This cycle of blood-feeding and egg-laying makes the female Aedes aegypti mosquito a great disease vector. If the first human she bit was infected with a virus like dengue, Zika, yellow fever, or chikungunya, now her second and third human victims are going to get sick.

How do we stop mosquito-borne disease?

Researchers at Rockefeller University have been studying mosquito behavior to understand what makes them so attracted to humans and to find ways to stop that attraction. And now they’ve found a possible solution.

The researchers thought that if we could understand how mosquitoes lose interest in humans after drinking our blood, we could try to find a way to turn off her desire for blood all the time.

Their search for why mosquitoes stop hunting humans after drinking our blood led them to a protein called NPYLR7. After figuring out that NPYLR7 was central to mosquito appetite, they found drugs that acted on this protein. Those drugs the mosquitoes’ desire for human blood.

NPYLR7 is part of a family of proteins related to Neuropeptide Y receptors, or NPY for short. NPY receptors are proteins that are found in many creatures from humans all the way to worms. They control things like how full you feel or whether you should search for food when you’re hungry.

Previous research showed that mosquitoes might use NPY receptors to decide when to search for a new person to bite.  To figure out if NPY receptors were responsible, the researchers started by feeding mosquitoes human diet drugs that worked on NPY receptors. The human drugs treat obesity in people. But in the mosquitoes, the drugs changed their desire to look for a new human to bite.

There are 49 different mosquito receptors that were possible targets of the human drug. The researchers individually checked each one for a response. At the end of the tests, just one receptor was left standing. NPYLR7.

Since NPYLR7 is so important, the researchers wanted to see what mosquitoes without NPYLR7 would do if given the chance to bite a human? They used CRISPR to make mosquitoes with a broken NPYLR7 and saw that these mutant mosquitoes still looked for humans even after having a filling meal of blood.

Without NPYLR7 mosquitoes are always on the hunt. But to fool hungry mosquitoes into losing interest in humans, the researchers wanted to find a way to activate NPYLR7. The problem is that you need to have an insect-specific drug that would activate this receptor without affecting the human NPY receptors.

We need to do testing outside the Lab

More research needs to be done on these possible drugs to see whether they could help limit mosquito-borne diseases outside the lab, but this could be a serious alternative way to control the spread of diseases like Zika.

Thanks to these researchers, we have learned the genetic basis that makes female mosquitoes stop searching for people after having a full meal of blood. Plus we’ve learned how to take advantage of that new knowledge to possibly limit the spread of mosquito-borne diseases.

This discussion is based on the following research: