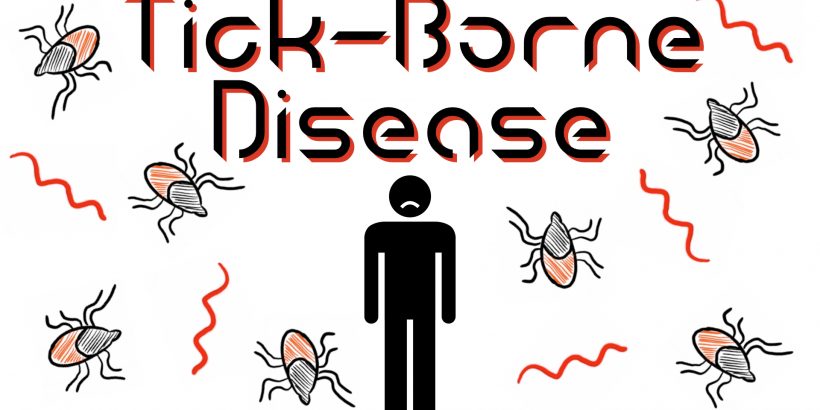 What’s up with Ticks?

Ticks transmit more than 10 different human diseases. The most common is Lyme disease. It’s estimated that bites mostly from the or deer tick cause about 329,000 cases of Lyme disease per year. That’s a little less than half the population of Boston.

Lyme disease is caused primarily by the spiral-shaped bacterium Borrelia burgdorferi. The disease can be debilitating with people experiencing different symptoms including rashes, headaches, and arthritis. Up to 90% of patients get better after taking antibiotics, but one in ten patients don’t. Those patients continue to experience muscle aches and fatigue long after treatment. One in ten is also the frequency of being left-handed.

Ticks are poppy seed sized members of the arthropod family which also includes insects, crustaceans, and spiders. Much of the research on the arthropod family is done on the Drosophila fruit fly, but researchers at the University of Maryland School of Medicine have been delving into the tick to learn more about its immune system. With more knowledge on how ticks deal with infection, they hope to learn how we can prevent ticks from acquiring, maintaining, and transmitting infections like Lyme disease.

They began with a simple question. Does the tick immune system work the same way when compared to the rest of the arthropods? Thanks to some genetic analysis and a lot of tests, we now know that not all arthropods are created equal. There is a divide in the arthropod world. Ticks, spiders, scorpions, centipedes, and millipedes are on one side and insects and crustaceans are on the other.

What’s separates the tick from the average arthropod?

The difference between the two sides lies in how a specific anti-microbial alarm system functions. The genetic pathway is called Immune Deficiency or IMD. In the fruit fly, the IMD pathway is pretty straight-forward. When a microbe infects the fly, it is recognized as an invader. After it is recognized, it starts a whole chain of events. The chain ultimately end in the production of small molecules called anti-microbial peptides that kill microbes.

When the researchers compared the DNA of flies and the DNA of ticks, they found that genes of several of the key molecules in the IMD system were missing! One of the missing molecules was a gene which makes an invader-recognizing protein.

After learning that ticks are missing some important IMD proteins, the researchers had two theories. Either the IMD system has fallen apart in ticks and no longer works or it still works, but the ticks use different proteins to tap into the anti-microbial defense system.

To figure out if the IMD system was still there and working in the ticks, they started with a protein called XIAP. XIAP is known to sense other infections like anaplasmosis. Anaplasmosis can cause fevers, liver problems, and enlargement of the spleen in humans. By using the XIAP protein as bait, they were able to see which other proteins would “bite” and hold onto XIAP. When they checked out their catch, they found several different proteins that are all part of the tick IMD system! It wasn’t gone after all!

One of the major molecules they found by using XIAP as bait was a protein called p47. When p47 is removed from the ticks, they are more prone to infection indicating that p47 might be part of the IMD system. The researchers then used p47 as bait and found another protein called Kenny. Kenny connects XIAP and p47 to the creation of antimicrobial molecules that fight infection.

But even though we now know about p47 and our picture is clearer, we are still missing some pieces of the puzzle. We know the tick cells recognize the Lyme disease microbe Borrelia burgdorferi, but we still don’t know exactly which proteins are involved and how those proteins then contact XIAP.

We also need to learn how exactly to take advantage of this new knowledge to limit tick-borne infections like Lyme disease. With more research, we can try to figure out why the tick immune system doesn’t totally eliminate human pathogens and find out if the human pathogens are maybe helping the ticks in some way.

Thanks to these researchers, we can appreciate the diversity of the arthropod immune system, and we know more about what makes the tick immune system special. Every new piece of information gets us one step closer to understanding vector-borne diseases.


Discussion on the tick immune system is from: