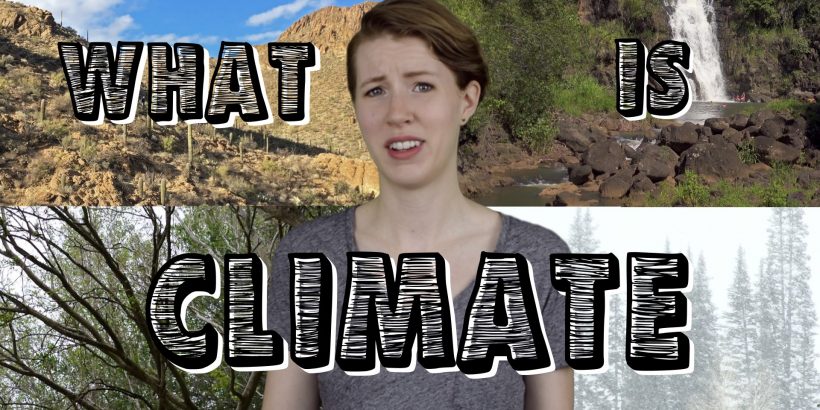 Climate and weather seem like they’re two words for the same thing, but they actually have two different meanings. The word weather refers to the air at a specific spot on Earth at a specific time, and it can change from day to day and even from minute to minute. The biggest change in the weather occurred in 1972 when the temperature in Loma, Montana went from -54F to 49F in just 24 hours! That’s going from frostbite in 5 minutes to wearing a light jacket in just one day.

But while the weather changes frequently, the climate in an area stays the same. Sometimes over hundreds of years! But what is climate? The climate of an area can be defined by a number of different measurements that include temperature, humidity, and altitude.

Temperature is pretty straightforward, is it hot or cold?

Finally, we have altitude which is how high above sea level you are. A sea level measurement of zero means that you’re on a beach looking at the ocean, or at least you’re at the same altitude that you’d be if you were at the beach.

The highest mountain on Earth is Mt Everest, and it is about 29,000ft above sea level. That’s about 27 Eiffel towers stacked on top of one another! Places with high altitudes like Mt Everest have thinner air meaning less oxygen to breathe and colder temperatures to deal with. That’s why there’s always snow on the top of mountains!

There are some other factors that play a role in an area’s climate, but the big three are temperature, humidity, and altitude.

Now that we know what climate is, why is it so important? Climate is important because it controls what plants and animals can live in different places on Earth. A hot, dry, and windy climate creates places like deserts, and they wouldn’t be a good climate for an animal like a  polar bear.

But it is a good climate for animals like lizards and plants like cacti. By looking at the climate of a place, you can predict what kind of life you’ll find there. Whether the climate is hot and dry like a desert or hot and wet like the rainforest. Different life comes with different climates.

Just because weather changes day to day and climate is more stable doesn’t mean that the climate of a place can never change. It just means that it changes slowly. For example, if you look back 20,000 years ago, all of Canada was covered in huge sheets of ice called glaciers. Now Canada is home to lots of beautiful forests. That change took place over a really long time allowing the animals and plants that live there time to either adapt or move somewhere new.

But sometimes climates can change faster than the animals can adapt. Now is one of those times. The ice in the polar caps is melting, the Earth is getting warmer, the sea levels are rising, and the world’s deserts are getting bigger. And it’s kind of our fault.

The cars we drive and the factories we run to make all our electricity have changed our climates. They did this by putting gases into the air that hold in heat making the Earth a warmer place. It’s like putting a sweater over the entire world. But it isn’t too late! We can unravel this sweater by using less coal, gas, and oil. Instead, we can use renewable energy sources like wind or solar.

Humans are smart and resourceful. We are capable of changing the world as we know it. Let’s just make sure we change it for the better when it comes to climate.