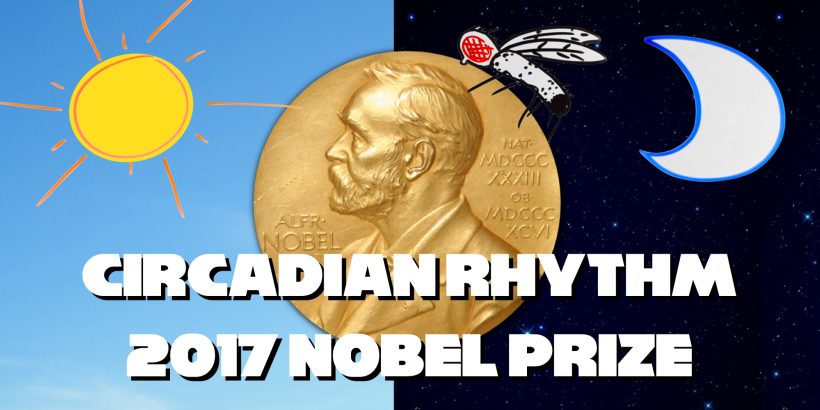 The 2017 Nobel Prize for Physiology or Medicine was awarded to Dr. Michael Young, Dr. Jeffrey Hall, and Dr. Michael Rosbash for the discovery of the molecular mechanisms controlling circadian rhythms.

Because I’m not on the nobel prize selection committee, I can’t tell you exactly why they picked this discovery over a number of other deserving discoveries. But I can tell you what these researchers discovered and why it is definitely nobel prize worthy.

Every morning you wake up and go throughout your day. You eat, you work, you get sleepy, and you go to bed only to wake up the next day and do it all over again.

You aren’t alone in this behavior. Every multicellular organism. Every animal and plant you’ve ever seen does the exact same thing. Every living creature on this planet is on a 24 hour cycle of activity and rest called the circadian rhythm.

What’s amazing is that we do this even in complete darkness. So how do we know when it’s day and night without the sun?

Our 3 nobel prize winners had the same question and to answer it they used a very simple and unassuming insect. The fruit fly.

These scientists worked on a gene called period that influenced the circadian rhythm of the fruit fly. One mutation shifted the cycle from the normal 24 hours to a longer 29 and another one to shorter 19. A final mutation removed all the rhythm from the fly causing it to wake and rest at seemingly random times.

But what was this gene doing? Was it making a protein that controls the timing? If so, what was that protein doing? Where was this protein in the fly? Or even in the individual cells of the fly? And finally how did it change the circadian rhythm?

In 1988, a few of those questions were answered. A paper came out that revealed that the period protein is in the nucleus of cells scattered throughout the body of the fly and that period was found more during the night with very little around during the day! This was the first hint that period was cycling in the same way that day and night do. From this protein cycling discovery, they came up with the idea that perhaps the period protein turned off its own gene.

One of the easiest ways to turn on and off a gene is to have the protein that gene makes also be the switch master. The researchers thought that the period protein turned off its own production which would lead to a cycle of period amounts. It’s kind of like when your car shuts down because it overheated. Once it cools down, you can start it up again, but when the engine gets to hot, it’ll shut off. A neat little feedback loop.

Over the next 4 years, period was heavily studied to find evidence for this feedback loop. And in 1994 another player showed up that helped confirm the feedback loop was real; another gene called timeless.

Timeless worked with period to move into the nucleus of cells and stop more period from being made. Timeless is like an employee with security clearance taking in an expert. Without timeless, period can’t get into the nucleus!

But period and timeless aren’t enough to explain the whole cycle. The final piece of the puzzle came in 1998: another gene called doubletime. The doubletime protein reduces the stability of period which leads to a delay in the cycling.

So the whole setup goes something like this: the period gene starts making the period protein. The doubletime protein limits the stability of period so it doesn’t build up too quickly. Timeless shows up and starts teaming up with period to move into the nucleus, and period shuts down its own production. But once the amount of period in the cell gets too low, the whole process starts up again.

But to really understand part of what made their work so special, you have to realize the time that they did it in.

DNA was discovered in 1953, but it wasn’t until 1966, 13 years later, that we figured out what all those As Gs Ts and Cs actually meant. That they were coding for the individual amino acids found in proteins.

The 70’s brought the first animal gene ever cloned and the invention of how to sequence pieces of DNA. And it wasn’t until 1983 that we invented a way to make lots of DNA quickly via Polymerase Chain Reaction or PCR for short.

Molecular Biology was progressing, but it was still massively difficult to go from a physical behavior to figuring out exactly which genes were responsible. Let alone figure out a complicated behavior like circadian rhythm.

The fact that the molecular basis of the circadian rhythm was found in the 80’s and 90’s is incredible. Circadian rhythms control so much of our health that we can feel them get out of whack every time we hop on a plane and change time zones.

The work these Nobel Laureates did is beautiful. It’s a wonderful feedback loop that perfectly mimics our days and nights here on Earth, but the fact that they did this work at a time where molecular biology and genetic techniques were only just getting their start only makes the work that more impressive.

So congratulations to the 2017 Nobel Prize in Physiology or Medicine Winners. And I just have one question: Can you cure my jet lag yet?

Discussion on the molecular basis for the circadian rhythm in fruit flies from: