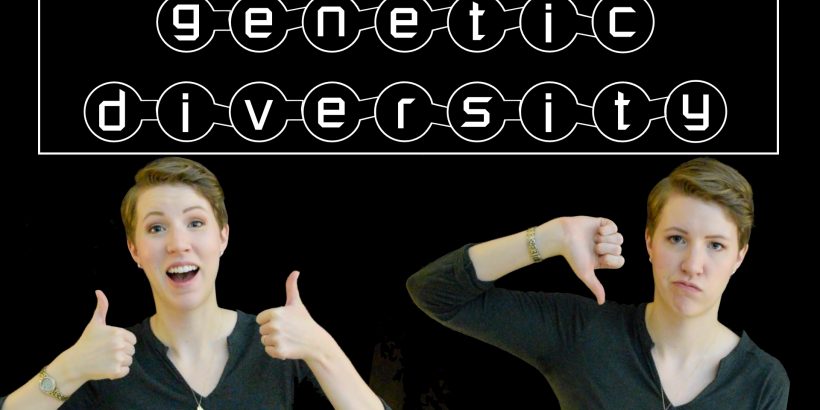 What do antibiotic resistance, the many colors of butterflies, and the fact that life still exists on this planet all have in common? Genetic Diversity! Genetic diversity is awesome! It’s what allows us to all be a little different and to overcome any obstacle that comes our way!

So what is genetic diversity?

You know how there are like a million breeds of dog, but they’re all still the same species and can have puppies together? That’s a visual example of genetic diversity. Humans bred dogs so that they would track animals or look like hot dogs.

But genetic diversity doesn’t only come about through human intervention. Most of it happens through random mistakes when DNA is replicated for events like cell division or creation of sex cells like eggs.

Let’s check out an example of genetic diversity in a fictitious population of puffballs. For all you star trek nerds out there, we’ll call them tribbles.

We start with a little group of red tribbles that are chilling by themselves and having a grand time just existing. They have a little family planning discussion and decide to have babies. Now there are even more tribbles who are also red.

Then those tribbles have babies, but now there was an accidental mutation in the DNA of one of the parent tribbles and one of those babies is now blue instead of red, but it isn’t a big deal. None of the other tribbles care that that Jim is blue and it doesn’t effect his ability to have babies, so the population continues to grow. As it grows, more accidental mutations happen and now there are green, blue, and red tribbles all living together harmoniously. This is genetic diversity.

Like the dog example earlier, this is another example of genetic diversity that changes physical appearance, but you can also have genetic changes in a population that don’t change outward appearance. Examples of this in humans are things like allergies, lactose intolerance, or whether you think cilantro is a tasty herb or green soap. I’m on team soap.

Now that we know what genetic diversity is, let’s look at how it can be a good thing.

Think about our little tribble family from before in all their many-colored glory. Now tragedy is about to befall these tribbles. A new predator has moved into their area and it has an insatiable hunger for tribbles, but it also has poor eyesight, so it can only see the red ones. Being a little furball with no defenses, all of the red tribbles are quickly eaten.

But, the tribbles don’t all die out! While there are no longer any red tribbles, the green and blue ones are still living (some traumatized) lives.

The bottom line here is that diversity is the way that populations overcome and adapt to unexpected changes in their environment. If all of the tribbles had continued to be red generation after generation, then when that predator moved in, they would have become extinct.

But while overcoming a predator was great in the case of the tribbles, it can also be a hazard.

To show you what I mean, let’s imagine that instead of tribbles, this population is actually made up of a deadly bacteria like Staphylococcus aureus which can cause blood infections, pneumonia, and sepsis. And instead of the predator that eats red tribbles, you have an antibiotic that can kill all of the bacterial cells except the black ones. But just like the tribbles that were left behind to live their lives, the black staph aureus cells left behind can still grow and cause disease, and your antibiotic doesn’t work against them. You’re in trouble. Now genetic diversity is a hazard.

The real-world example of these antibiotic-resistant black cells are MRSA which stands for methicillin-resistant Staphylococcus aureus. MRSA infects thousands of people per year and can be deadly.

Genetic diversity is all around us! It’s what makes our world a beautiful place full of millions of different species! It is the key to surviving changing conditions whether it is different temperatures, a new predator, or a disappearing food source. Diversity helps species survive which is sometimes the best, but other times… it’s the worst.