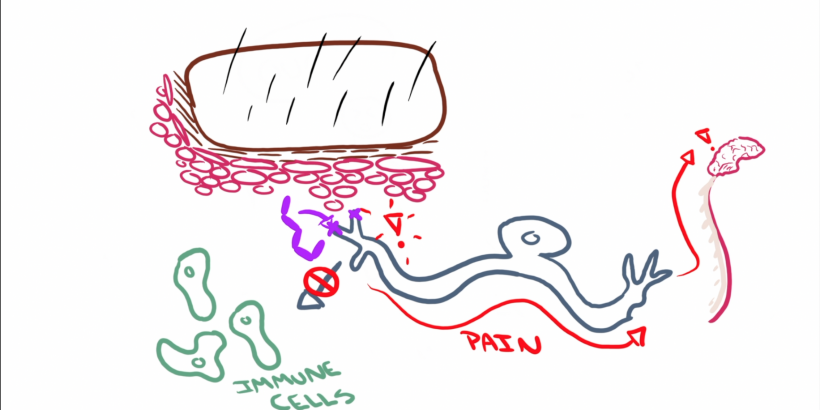 Necrotizing Fasciitis or, as it is more commonly known, flesh-eating disease is a rare but deadly infection of the skin and soft tissues. It infects around 200,000 people a year with a mortality rate of about 30%. That’s like losing 10 chapters worth of words out of the final Harry Potter book.

This rare disease is most often caused by streptococcus pyogenes, the bacteria that causes strep throat. When this bacteria gets into the skin and spreads it can become an infection like flesh-eating disease.

Besides the general displeasure of having something called flesh-eating disease, patients also have extremely intense pain before any other signs of the infection show up. After the initial pain, flesh-eating disease is really aggressive. It often needs to be treated via tissue removal or even amputation.

Researchers at Harvard Medical School thought that the pain was a clue into how the disease works. Turns out they were right! They learned that the strep pyogenes bacteria are activating special pain-sensing neurons on purpose. The bacteria activate these neurons by injuring them. This injury causes the neurons to release a signal that keeps the immune system away. Basically, by injuring the neurons, the bacteria are helping themselves avoid the immune system and stay alive!

To figure out exactly how the bacteria were activating the neurons, the researchers started with strep pyogenes taken from human patients and injected it into mice. Within minutes of injection, the mice showed signs of pain.

Previous researchers found that strep pyogenes secretes a pore-forming toxin called SLS. This toxin is able to punch holes into cells meaning that SLS could cause the pain-sensing neurons to sense pain. By engineering a version of strep pyogenes without SLS, the researchers proved that SLS was the cause of the pain during infection.

But why do the bacteria secrete SLS? The researchers learned that when SLS punches holes in the sensory neurons and causes the pain, the neurons send a signal in the form of a neuropeptide called CGRP. It’s a signal that tells the immune system to stay away.

The first treatment uses a molecule that shuts down the CGRP signal going from the neurons to the immune system. This molecule is called BIBN4096 and similar drugs are used to help with migraines.

The second treatment uses botulinum neurotoxin which prevents the injured neurons from releasing CGRP in the first place. Botulinum neurotoxin is a protein used for cosmetic procedures, bladder dysfunction, and also treating migraines.

The third method is specific to strep pyogenes infections. It uses an antibody to block the pore-forming SLS protein from creating holes in the neurons.

All three of the treatments were effective for the mouse patients, but the next step is to try them out in the human ones. Flesh-eating disease caused by streptococcus takes advantage of the nervous system talking to the immune system, but it’s possible that other diseases like MRSA do too. This paper is just the start, and, as always, we’ve got a lot more to learn.

This is a commissioned article.