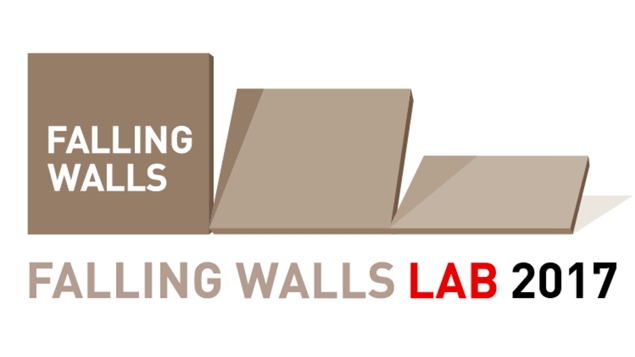 It’s 9am and I’m freaking out. 45 minutes. I have 45 minutes before the stage that I’m staring at is all mine. 45 minutes before I tell a room full of amazing people from over 40 countries about my idea to change the world. And how long am I on stage, you ask? Three minutes.

The Falling Walls Lab is a competition held in Berlin every year that brings science innovators together to pitch their ideas to a distinguished panel of judges. The innovators are selected through a series of local labs that take place in cities around the world and the winner of each lab comes to Berlin. The local labs narrowed down thousands of applicants from nearly every continent to an elite 100 competitors making this the most international event I’ve ever competed in.

When is the last time that you listened to 100 talks in a row where each one was amazing, ground-breaking, and delivered flawlessly? If you had come to Berlin with me, you’d be able to say Nov. 8th, 2017.

It’s 9:05am and I’m still freaking out, waiting for my turn. Each participant got a randomly assigned slot from 1-100 for the day. I was number 8. I love going early in the day, but that means that the nerves set in the second the event starts.

The welcome and introductory remarks begin. 30 minutes until my pitch. There is a reminder of the rules of the competition and some housekeeping announcements. 25 minutes until my pitch. I’m counting down the talks from the first to the sixth. After the sixth, I’m fitted with my headset so the crowd can hear me. 6 minutes. I’m trying to listen to talk number 7, but I can’t seem to focus on the words I’m hearing. 3 minutes. Finally, the countdown clock in my head hits zero. I hear my name announced on the loudspeaker and I step onto the stage. The last 30 minutes of intense nerves fade away. This stage is mine and it’s time to give it all I got.

In a sea of pitches on new medical breakthroughs and unbelievable social initiatives, I feel like an outsider. Unlike almost everyone there, I’m not pitching my research, I’m pitching my YouTube channel. I take newly published scientific papers and convert them from their dense and jargon-laden natural state to a fun, fact-filled, and scientifically accurate story. I do this because scientists have their own language and it’s as real and different as French or Farsi.

The language of science masquerades as English, but as anyone who has tried to read a scientific paper without the years of intense study undertaken by scientists knows, it can be as foreign as Mandarin. Scientific papers are like Japanese poetry, google translate isn’t enough. It takes a human touch to translate not just the words but the deeper meaning behind them. That’s what I do. I take the science in its fullest form complete with caveats and controversy, and I translate it to plain English complete with pictures so you can visualize the science.

My goal in starting my YouTube channel was to take modern-day biology and uncomplicated so that everyone can know about current research. Because I was taking biology and making it simpler, I called my channel SimpleBiologist. I’m connecting science with society through our new favorite way to get information, videos. People deserve to know about the newest research, and open access publications alone aren’t going to give them what they need. We need skilled translators who can accurately convey the beauty of science to people other than scientists. I’m one of them.

The slogan for Falling Walls is great minds, 3 minutes, 1 day. As much as the Falling Walls slogan captures the essence of the event, there is so much more that it leaves out. There are 100 winners with great minds that come to Berlin to give their 3-minute pitches back-to-back in one day. But I had a view into more than the 3 perfect minutes of stage time each winner received. I got to know these great minds not just as ideas, but as people with their own struggles and passions.

I wish I had more time to get to know each and every participant. With our hectic schedule, I only met and talked to about half. Despite the time crunch, this was an event and these are people that I will remember for a lifetime. In the end, I wasn’t selected as one of the top three innovators, but it doesn’t matter because I achieved my goal. I went on stage and told my idea to 99 of my peers, and I got to hear 99 other amazing ideas in return. Could one day be any better?